Male friendship has variously felt irrelevant, desirable, disappointing, and simply confusing to me through my life. In the lonelier years of grade school, it was something I wanted on paper, but in practice talking with boys was marked more by aggressive posturing or thick layers of irony than a sense of connection. Girls were by far preferable, though spending too much time with them would result in shouts of “Wheels!” from any boys in the vicinity. (Needless to say, this was before I would have even considered coming out as bisexual.)

At CMU, I have had many fruitful and 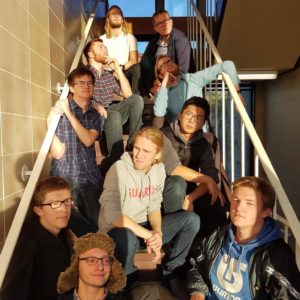 beautiful friendships. The vast majority of these at first were again with women, though the context here is much more hospitable to relationships across gender. Despite living in the residence among other men, however, I still found I rarely formed good connections with them. A few other guys were feeling similarly, and so we decided to get together and do something about that. Enter: the Boy Talk.

“Boy Talk,” a willfully ridiculous name that has proven unshakeable, formed nearly a year ago. At the time of writing, it has stabilized as a closed group of 11 male CMU students who gather on a semi-monthly basis to hang out and discuss their lives confidentially. So far, it has been a space for ridiculous photoshoots, board game playing, deepening trust, and giving voice to the accumulated joys and hardships of our lives.

I always worry the idea of a gender-segregated discussion group may give the impression of some anti-feminist or exclusionary stance, as though there is some lack of male-dominated spaces that needed to be filled. In truth, the residence where most of our members live has a degree of gender segregation built into its geography, and our intent is not isolationist. I did not join this group to privilege my male friendships, but rather to bring them up to the standard I have experienced in friendships across gender, which by and large had to that point been far more genuine and trusting. 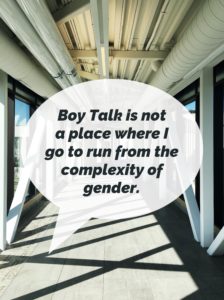 Boy Talk is not a place where I go to run from the complexity of gender. Rather, it is a place where I plunge headfirst into the work of finding my place in its complexity, not in some abstract intellectual way, but through the practical effort of literally putting myself in the presence of other men and opening ourselves up to each other. Even though our conversation is only sometimes about masculinity directly, the very exercise of talking in a context of safety and trust has allowed me to reflect on how I present myself as male, and how I relate to others doing the same thing. At its very best, Boy Talk has been a communal sandbox for discovering smarter, healthier masculinities.

Recently, Boy Talk was asked to be interviewed in the Canadian Mennonite. This idea surprised us initially—Boy Talk is a small, private group with small, private goals. It didn’t seem to necessarily merit the attention of a broader audience (though we may have admittedly courted such attention by changing our public profile pictures to a matching group photo.) We ultimately went through with it, though, in the hopes that we might serve an anecdotal purpose—one example of how men might deal with loneliness and a lack of connection. Fighting unhealthy masculinity requires men to not only re-evaluate their relationships with women, but also consider what they want from themselves and each other. Male friendship continues to confuse me, but working through that confusion has brought me a better understanding of both my friendships and myself.

Isaac Schlegel is a third-year student double majoring in Philosophy and Biblical and Theological Studies.

Hope and Inda – Roomates from across the globe (part 2)