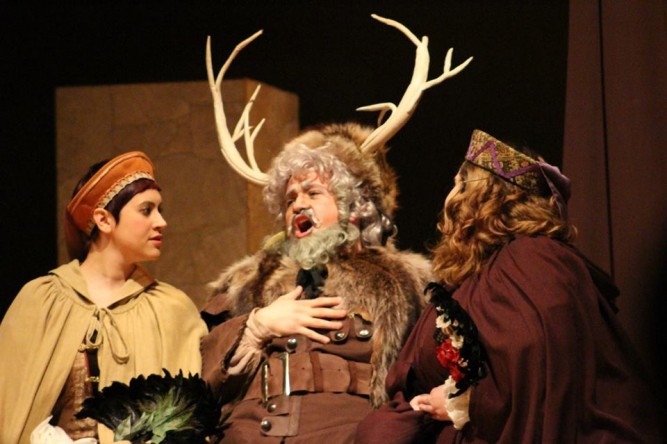 Another opening, another show

CMU’s Music department is one of its strongest faculties, and even if you’re not in it, you can tell. Music permeates CMU culture. The university’s choirs, which are open to students of all programs, are always full. The weekly recitals given by students taking independent applied music studies, say in voice or piano or saxophone, are always well attended by students of every bent. We sing in Chapel, we sing at Wednesday Night Worship, our student body comprises dozens of independent little bands and singer-songwriter acts that play regular gigs both locally and inter-provincially.

Accordingly, it is not really surprising that CMU’s annual Opera Workshop production is such a big event.

Opera Workshop is a course offered every year to students who want the truly unique experience of participating in an actual opera, on stage, with costumes and makeup and the works. Priority casting is given to music students, and among them especially to music majors, and among them, especially to those concentrating in performance. So as you can imagine, the principal cast of each production is made up of that year’s Music faculty crème de la crème. And at CMU, that’s some fine art.

Preparation for the musical event of the year is a marathon endeavour, every time. The cast and chorus spend from early September right through to opening night in early March practising, polishing, perfecting their parts to an excruciating degree. It is a demanding, and incredibly time consuming course and everybody who takes it (I speak from experience) asks him-/herself at some point in the process what on earth they have gotten themselves into. Even their friends feel the pressure, vicariously.

But all the angst, and all the rehearsal, and all the nit-picking, and the paranoid fending off of spring laryngitis—which inevitably breaks out the week of the show—it all pays off in the end. Audience members from all over Winnipeg, Southern Manitoba, and beyond hear CMU’s very best take the likes of Gilbert & Sullivan, Bernstein, and Strauss by the horns. And the performances are always spectacular.

This year’s production was Otto Nicolai’s operatic setting of William Shakespeare’s (dare I say feminist?) comedy, The Merry Wives of Windsor. As you would expect, the show entailed witty humour both situational and vocal, utterly farcical yet still believable acting, young love frustrated by the forces of marital politics, plenty of “revelry and merry-making,” some truly sassy Elizabethan women, trouble-makers receiving due comeuppance, and a wedding finale.

As you might not expect, it also entailed intermittent exclamations from a murderous but very stylish Frenchman, some cross-dressing, and the relatively frequent wearing of elk antlers.

My husband and I saw the show opening night, and there was a palpable buzz in the air from start to finish. Illustrious director David Klassen set things off on an appropriately fabulous tone with a polished introduction, and effortless hair that set a new gold standard for flow-lovers everywhere. True to form, all the performers gave star-studded vocal performances; we were particularly enthralled by the masterfully executed duets between leading ladies Diedra Borus (Mrs Ford) and Elowen Braunstein-Black (Mrs Page.) Most thrilling of all though, this year’s show raised the bar for acting-quality in CMU opera by several notches. Leading man Matthew Baron gave a fully committed, truly Shakespearean John Falstaff, and Elowen Braunstein-Black—despite having many fewer spoken lines than her counterpart—positively radiated charisma, wit, and humour, fully embodying a triumphant Merry Wife.

All together it was a charming night out for all concerned; and for the cast and crew, the entire weekend was a glittering victory. We cannot wait till next year!

Starting to look seriously at your schooling optio

This year, CMU is pleased to announce the four win