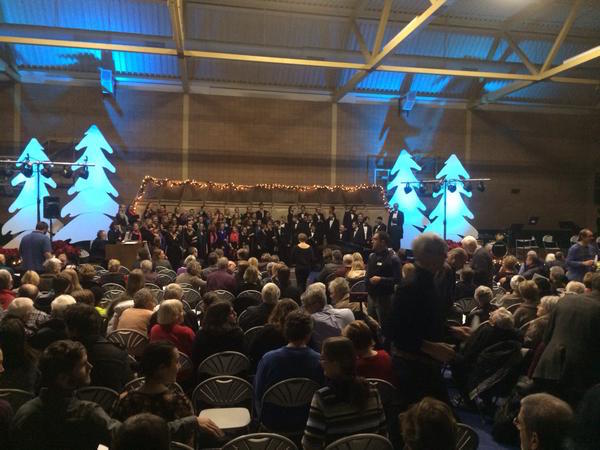 As the north side of CMU began to transform into a very Christmas-like place, the sense of anticipation about Christmas at CMU became more and more real. Since this is my first year being part of the CMU community, I really didn’t understand why there was so much preparation for and excitement about this event. The day arrived and there was excitement and Christmas spirit in the air.

As some of my friends and I walked towards the north building, we realized how packed the place was going to be. Most of the people I walked with were not planning on staying too long and were hoping to get cider, a couple of cookies, and maybe watch one of the performances. As soon as we stepped inside, we were surprised by the multitude of individuals bustling from one place to another and the smell of the cookies that we had been craving. I was hoping to meet with a friend in between all the commotion, but after waiting for a couple of minutes I was carried with the crowd to hear the CMU Chamber Choir. I was impressed at how professional and great the choir sounded. I enjoyed every piece and the crowd seemed to agree with me as we all erupted in applause after their performance. The performances were so good that my friends and I nearly forgot about the cookies and apple cider. While making a quick run to get snacks, I was amazed at how many people bumped into old friends, professors, and family members. Names and greetings were shouted out as people moved from one performance to another. I was able to enjoy the Men’s Chorus and after their extraordinary performance, the crowd was delighted by the Guitar Ensemble.

To bring an end to the great afternoon, a couple of CMU students and I joined the choirs. The simple afternoon in which we mainly hoped for cookies and apple cider turned into a musical evening full of laughs and a time to enjoy the various muscial talents at CMU. I began to understand why Christmas at CMU was such a big deal. It was more than just the food and the choirs—a time to join as a community and enjoy each other’s company before the holiday season becomes too chaotic. Christmas at CMU is a time where old friends can reunite and old memories can be relived over cookies and apple cider.

Cesar Flores is one of CMU’s Student Ambassadors

Living in residence: A rich and stimulating experience