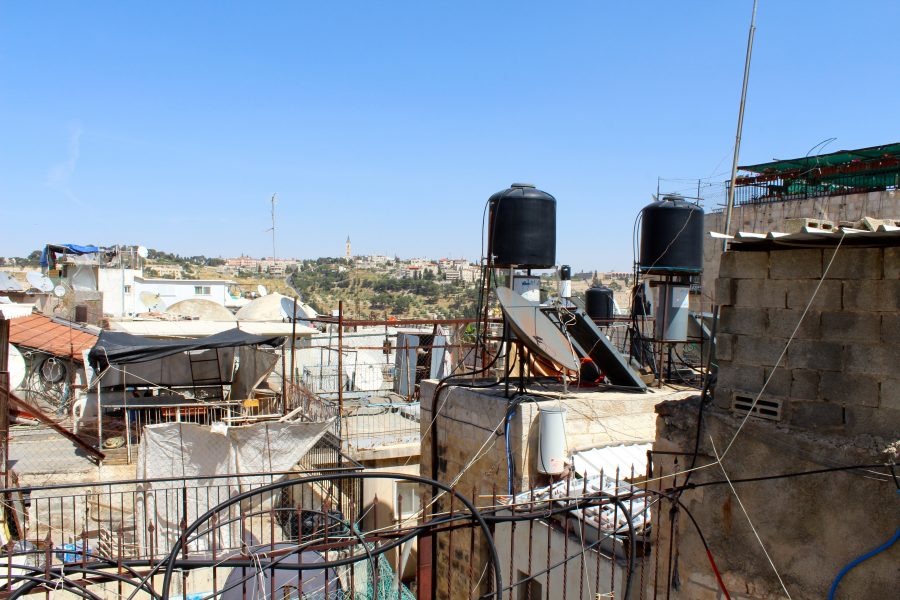 Visiting Israel and Palestine: Finding connection in the Holy Land

This past spring, I participated in Canadian Mennonite University’s Ancient Stones, Living Stones Study Tour which went to Israel and Palestine. As a third year student studying Biblical and Theological Studies at CMU I found the tour particularly eye opening to current conflicts which overrun the Holy Land. The land that is now Israel and Palestine has always been a land of many people and many different religions. However, everyone has their own take on history which adds significantly to the conflict which absorbs the Holy Land. By actually being in the Middle East and interacting with the people that live there I began to recognize that the conflict was not started by one group of people.

Selenna Hildebrand on the Ramparts, walking the wall of the Old City of Jerusalem

Everyone that lives in the Holy Land has an extremely deep connection with the land. The Israeli people connect themselves to the Holy Land through the promise God made to Abraham in Genesis. This happened over three thousand years ago. Jewish people understand that it is their duty to be apart of fulfilling Gods promise by living in the Promised Land. A Jewish settler we spoke to who was originally from the United States said that he felt a certain connection to God and his spirituality was strengthened by living in Israel which he would not be able to find anywhere else.

The Palestinian people have a connection to the land which lasts hundreds of years. Our tour guide, Khalil, showed our group his family home which is located inside the Old City of Jerusalem. The house, which was made up of small apartments built randomly on one another, has been the family home since the fourteen-hundreds. He said that the house would sell for a few million dollars because the real estate within the old city walls is extremely valuable. However, the family will never sell the house. It is a part of who they are.

A young man named Mohammed gave us a tour of Aida refugee camp near Bethlehem. Mohammed was born and raised in the refugee camp; it is his only home. His grandparents, just like many others in the refugee camp, continue to hold on to the key that used to open the door to their home in their old village that was destroyed in 1948. The key is a symbol of hope; one day they will return to their true homes in the villages that no longer exists.

I do not understand having a connection to the land in any of these three ways. I am able to recognize that the land is extremely important to every individual that finds him or herself living in Israel and Palestine. It is this connection to the land which is at the root of the conflict in the Holy Land. There will never be a simple solution because everyone has their own strong opinions of what should be done. My hope, as a Canadian Mennonite, is that I can share real Israeli and Palestinian stories in hopes of others learning about the people who truly live in the Holy Land so that we as Christians can learn to see the value of the Holy Land outside of a Christian context.

Summer: A time to challenge and ask questions

A student’s guide: How to transition into university life at CMU